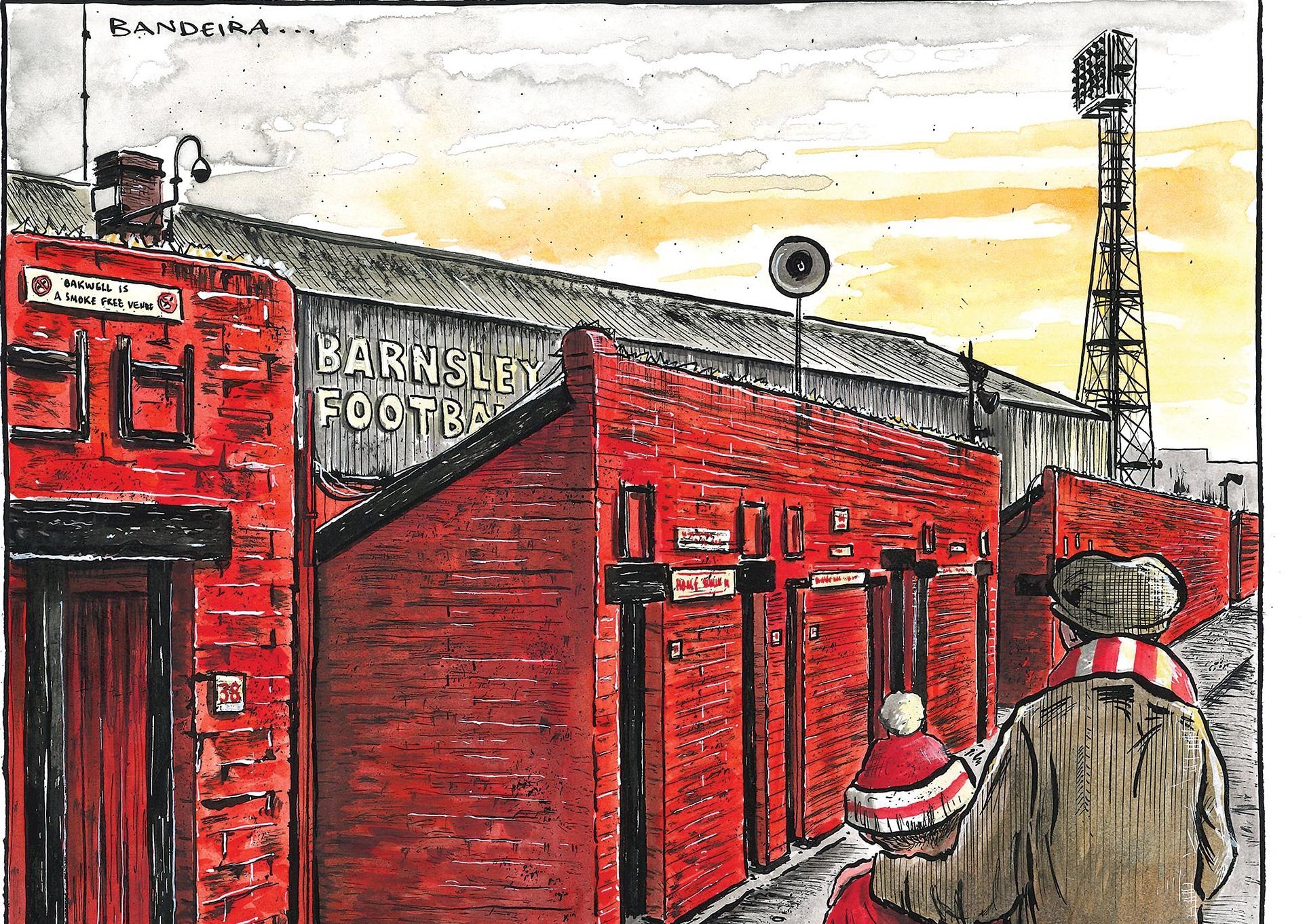 I remember getting the bus to watch Barnsley FC in the late 80s with my dad, uncle and cousin, Pete. We would get off the bus at Barnsley bus station then walk through the poverty-stricken town, suffering from the aftermath of the miners’ strike. We were lucky enough to be able to afford our football tickets, as well as the pie and peas in the market on the way to the ground. Many people couldn’t afford this luxury. 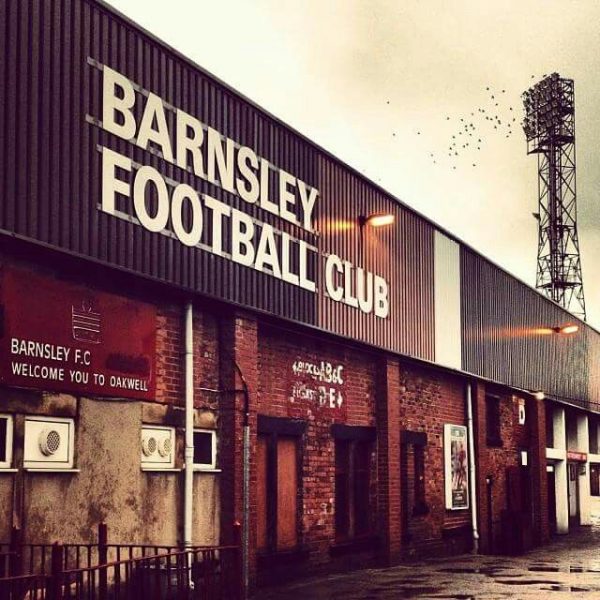 The football matches provide great memories, marred only by the sights and sounds of hardship in a town that had suffered so much at the hands of the Conservative government and Margaret Thatcher’s decision to close all of the mines, preventing people from earning their ‘crust’ and supporting their families. 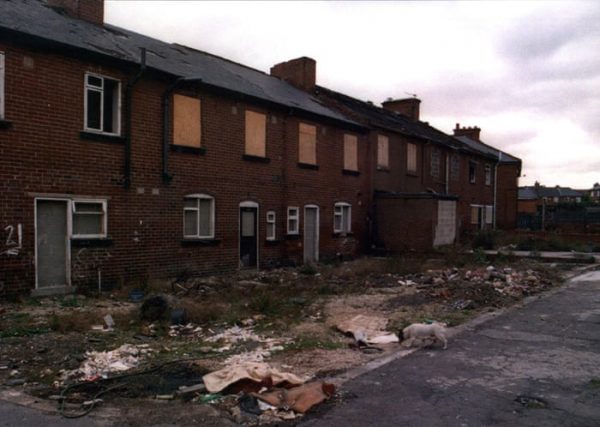 Outside of Oakwell (Barnsley FC’s football ground), members of the supporters’ club would walk around with buckets labelled ‘Save our Club’ or ‘Help Barnsley FC’ and we, along with many thousands of Barnsley supporters (and indeed supporters of the away team on the day), would give our spare change to support the club and prevent it from extinction.

When the owners of six of the biggest clubs in England announced that they would join the proposed European Super League a couple of weeks ago, I felt sick in the stomach. Yet again, the disconnection between greedy billionaire club owners and the fans was highlighted. Lifelong fans of the clubs (and in many cases, sons/daughters, grandsons/granddaughters, great grandsons/great granddaughters of lifelong fans) were left out of this decision. Fans were ignored – indeed players/managers were ignored. Like corporate businesses that make decisions from above with no consideration of the workers that have collectively made their business the success it is today, the owners put their own, selfish, greedy needs and wants before everyone else who matters.

Within a couple of days of the announcement, fans, league bosses and even the UK Prime Minister, made their voices heard. Manchester United executive vice chairman, Ed Woodward, resigned; players, coaches and fans of all six clubs voiced their disdain regarding the move and – somewhat embarrassingly – all clubs withdrew from the competition. Over the past fortnight, spokespeople of Liverpool, Manchester United, Manchester City, Tottenham Hotspur, Chelsea and Arsenal have apologised for their involvement and pledged their loyalty to the fans and domestic competitions. 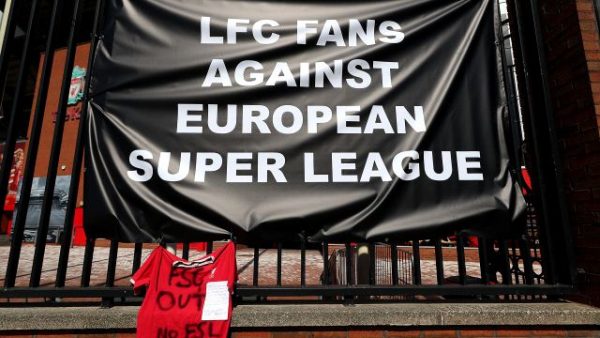 On Sunday, Manchester United were due to face Liverpool in possibly the greatest fixture in English football – indeed one of the greatest fixtures in world club football. However, United fans took the opportunity to voice and display their thoughts about the club’s owners, The Glazers. These fans were peaceful and they weren’t (as one might have expected) mainly men in their twenties. Coming down the hill at the infamous Stretford End were women and men – some of whom were in their fifties. Some fans wore the gold and green colours (which were United’s first colours when they were formed as Newton’s Heath in 1878, 143 years earlier) – that is some history! Indeed, when United fans began protesting against the money hungry Glazers back in 2010, they wore these colour to demonstrate that the club is much more important and has significantly more history, than the Glazers know, or indeed care about. 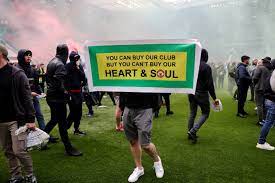 On Sunday, hundreds of fans broke into Old Trafford (fans are still exempt from attending due to the COVID pandemic) and they peacefully spoke their minds and displayed gold and green through streamers and clothing. The fact that they broke into the club that they believe belongs to them, is significant. Manchester United was a debt-free club prior to the Glazers’ takeover and it is understood that the general finance costs, interest and dividends of the takeover cost United a billion pounds. The club is estimated to be in over 450 million pounds in debt. 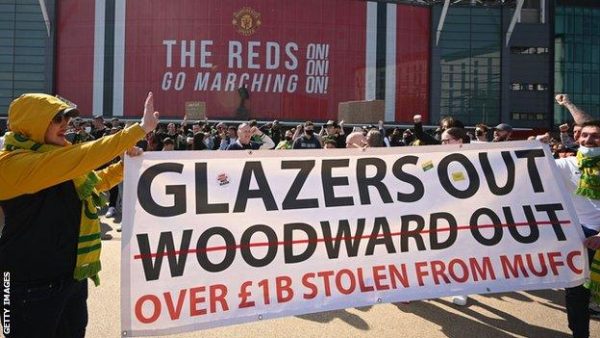 The supporters are sick and tired of these billionaires doing what they want and treating the club as only a business – and they intend on taking their club back.

I think I speak for fans, players, managers of every club in the UK when I say: Greedy, selfish, money-grabbing arseholes – LEAVE OUR CLUBS ALONE!!!